The original pioneer settlement on the shore of Lake Tahoe is now South Lake Tahoe’s oldest and historical neighborhoods called “Al Tahoe”. The move towards modernization over the decades has eliminated many of the old dirt trails and historical sites, but one can still get a glimpse into what life was like back in the 1850’s. 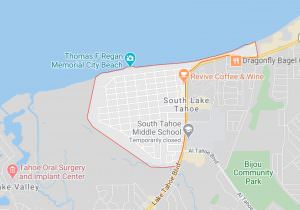 The neighborhood was formed in 1859 as the gold deposits dwindled to the west of Lake Tahoe and miners ventured east to Virginia City for newly discovered silver. The dirt roads along the lake in the current Al Tahoe neighborhood were well traveled during this time. A hotel, shops and homes popped up for the people wanting to sell supplies to the travelers. Before this, the area was home to Washoe Indians who had a camp in the meadows next to the lake.

In 1868 a small community named “Rowlands” was formed in the area at the northwestern end of the current Lakeview Avenue. It housed shops, a schoolhouse and a hotel. Lake House, built in 1859 to house travelers, burned down in 1866 and was rebuilt as Rowland’s Lake house and Station. It has been reported that when Rowland’s hotel collapsed in the winter of 1889-90 the wood was salvaged and used for the main dining room at Fallen Leaf Lake.

So you ask, who is Al? The neighborhood is named Almerin (Al) Sprague who built a 3 1/2 story hotel in this community in 1907. He named it the Al Tahoe Inn. You can see a mural on the side of the Tahoe Daily Tribune’s office on San Francisco Avenue which is a rendition of the Al Tahoe Inn. The inn was bought by Frank Globin in 1924 who then added a local market and restaurant. After 1945 businessman Aram Harootunian from Los Angeles bought the whole area, subdivided it in lots and sold them for $10 down and $10 a month! Unfortunately the new grid of streets and lots covered up what we now know as valuable historical areas.

For a walking tour map of Al Tahoe which highlights the above mentioned locations as well as all other historical information, stop by the Lake Tahoe Historical Museum.  They sell a very informative map of the area for $5. It gives you details on where the hotels were, where Rowlands was, who Regan Beach is named for and much more.

Homes for Sale in Al Tahoe

There are homes for sale in historic Al Tahoe.  This is a very sought after neighborhood, not only because of it’s history but because of its close location to beautiful Lake Tahoe. You can find homes on the lake, near the lake, meadow-front, condos, homes, large, small…a bit of everything.  The City of South Lake Tahoe recently created Lakeview Commons, including bike trails, beach, boat launch, picnic tables, BBQs, kayak and water toy concession, grassy area as well as a roped off swim area. The summer “Live at Lakeview” events on Thursday nights have become a locals favorite and added a renewed spirit to the Al Tahoe neighborhood.

Thanks to the Lake Tahoe Historical Society and University of Nevada, Reno for their information and pictures.

It’s About Time Redevelopment Moves Forward: The big news this week for those keeping an eye on the old South Lake Tahoe… 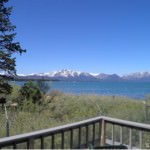 Bidding on a home before you’ve seen it in this hot market With a rapidly reducing inventory of homes for sale, both… 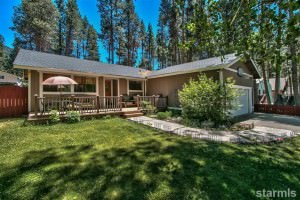 In South Lake Tahoe, closed sales of homes were down 11.6% in July and the median sales price went up 19.7% to…